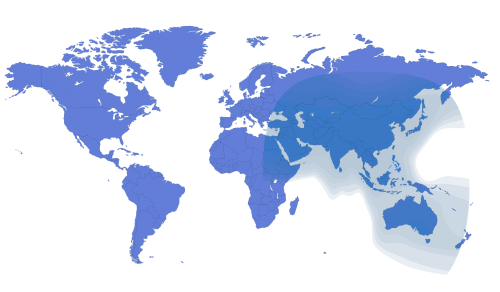 Satellite Coverage
Asia, Middle East, Eastern Europe, CIS and Australasia
AsiaSat 5 at the orbital location of 100.5 degrees east has C-band footprint that covers more than 53 countries spanning from Russia to New Zealand and from Japan to the Middle East and parts of Africa.
AsiaSat 7 is designed as a replacement satellite for AsiaSat 3S at the orbital location of 105.5 degrees East. With its region-wide C-band footprint covering Asia, the Middle East, Australasia and Central Asia. AsiaSat 7 supports a broad range of applications including TV broadcast and VSAT networks across the region.